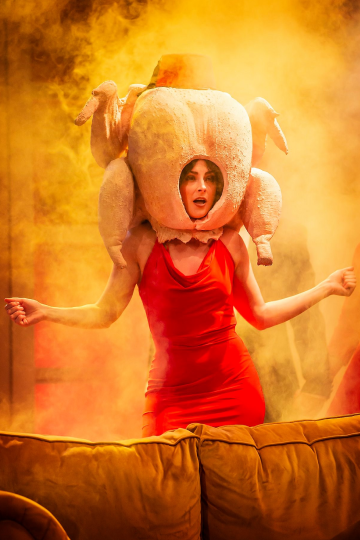 What happens to Monica’s hair?

Friends is one of the best loved comedy series of the 1990s and early 2000s, boasting a cast and storylines that resonated with millions of individuals. Now it’s a hit parody musical that’s touring the UK, and bringing the antics of television’s favourite gang of friends to a town near you. If you’re looking for things to do in Coventry this summer, head over to the Assembly Festival Garden to join in the fun. Book your tickets to the Friends show, Friendsical, today!

Jennifer Aniston’s character, Rachel Green, had a hairstyle that was iconic in the mid to late 90s, with every teenager and person on the block asking hairdressers for ‘The Rachel’. But what about Monica’s personal style? Over 10 seasons, Courtney Cox’s character had her own evolution when it comes to haircuts. Let’s take a look.

Seasons 1 and 2: Bob and bangs

In the first series of Friends, Monica sported a bob with a heavy fringe (or ‘bangs’ if you’reAmerican). Her hair has lots of body and was a deep black that showed off herpale complexion. In the second series, the bob had grown out a little and the fringe became wispier, creating a more refined look. And its season’s 1 look that Friendsical’s Monica opens the show with!

In series three, Monica’s bob is long – sitting on her shoulders – and she says goodbye to the fringe, which is grown out. You’ll often see her with a ponytail or half-up, half-down look in this series.

Monica wears a sophisticated, choppy crop in the fourth season, complete with flattering layers and flicky ends. A light, wispy fringe is also brought back into the picture, framing her face perfectly.

By Season 5, Monica’s messy crop has grown out and she’s back to sporting a shoulder length look. The layers are gone, and instead Monica’s ’do is sleek and often straight, though you will see her experimenting with crimps and curls throughout the series.

Long, straight locks are the order of the day in Season 6, with the raven colour of Monica’s hair complementing her porcelain skin. The length highlights her features and the glossy condition of her tresses.

Monica appears in Season 7 with yet another stunning style. Her hair now has layers cut in, giving it body, while some subtle highlights give depth to the dark shade, and soften her features a little. For Season 8, the length remains, but there are a few more highlights and layers, with flicky ends giving shape to her ’do. She wears it in loose waves that create a relaxed look.

Monica goes back to a shoulder length cut in Season 9, and adopts a long fringe that’s swept to the side for achic, sassy look. She’s kept the layers in, which give her hair volume and definition, and she wears it both straight and wavy throughout the series.

The final season saw Monica go back to her younger days with a bob cut. The side fringe and layers remain, but the length is chopped to her shoulders. The overall look is a soft, elegant one.

If you’ve loved Monica and her style over the years, don’t miss the chance to see Friendsical this summer and see what looks they bring to life! – it’s oneof the best Coventry attractions around!