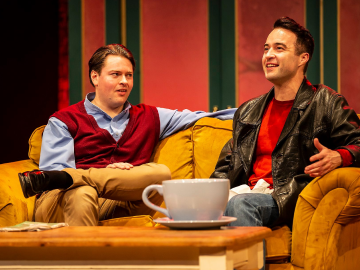 The story behind, “We were on a break!”

Regular viewers of the hit 1990s Friends show will be familiar with the running joke, “We were on a break!” But where did it all start? Let’s take a look at the original scene that began the whole thing – which lasted until the very last episode, “The Last One, Part 2”.

In the fifteenth episode of Season 3, “The One Where Ross and Rachel Take a Break”, the couple separate following Ross’ suspicions that Rachel is having an affair with her colleague, Mark. He complains about how much time they’re spending together until Rachel becomes so frustrated with the number of arguments it’s causing that she delivers the fateful line, “Maybe we should just take a break”.

Whilst Rachel thinks they are just taking a break from each other, Ross believes that their relationship is effectively over, and retreats to a bar. After calling her and hearing she’s upset, Mark goes to Rachel’s apartment to comfort her, and is overheard by Ross when he later calls her to reconcile. Ross jumps to the conclusion that Rachel was indeed cheating on him, and subsequently has a one-night stand with Chloe the Zerox girl, who also makes a unexpected appearance in Friendsical.

The one-night stand doesn’t stay a secret for long, and in “The One With The Morning After”, the pair have another heated fight after Rachel claims Ross cheated on her. Ross, mean while, maintains that since the couple had broken up, there was no cheating which leads to him exclaiming, “We were on a break!” – which then coins the phrase that is repeated by Ross repeatedly in later episodes.

In “The One Without The Ski Trip”, the recurring rows with Rachel see Ross repeat the phrase, “We were on abreak!” many times, turning it into something of a catch phrase. The line isthen used for comedy value in later episodes, notably in “The One With The Jellyfish” when Ross complains about Rachel’s letter to him where she goes on for eighteen pages (front and back) about how he was ‘unfaithful’ to her!  He once again shouts, WE WERE ON A BREAK!”

In “The One With Joey’s Porsche”, the line is brought up again when Rachel finds out that Ross didn’t get the irannulment. Rachel says, “I’m so mad Ross… I don’t think I’ve ever been this angry”, to which Ross replies, “What about the time I said we were on a break?” The line is said so many times throughout the seasons, it seems only fitting that there is a song titled, “We Were On A Break” in Friendsical.

If you love Friends and you miss the regular instalments of the friends’ lives, maybe it’s time to find outwhat happened next. Friendsical is a hit theatre show touring the UK this year, and gives audiences the full Friends the musical experience. This Friends musical parody is packed with humour, chaos and nostalgia, and is the perfect pick-me-up if you long to revisit the iconic world of this inimitable New York-based gang.