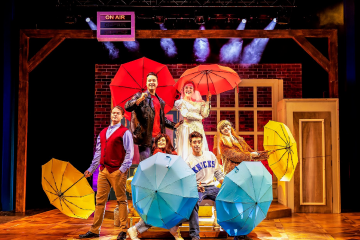 Fans of the hit TV show Friends willknow that Phoebe Buffay loved a good strum on the guitar and wrote some truly unique songs – a grand total of 55 through the show’s 10 seasons. And her musicwas as much a part of her character as her sweet and kooky nature. If you love Phoebe, and are wondering what to do in Coventry this July, you’ll love Friendsical,a Friends musical parody full of humour, chaos, nostalgia – and of course, some super sing-along songs.

In tribute to Phoebe’s specialmusical talent, here are some of her very best numbers.

A power outage in Season 1’s “The One With the Blackout” sees five of the friends (excluding Chandler) gathered in Monica’s living room waiting for the lights to come back on. The event induces Phoebe to create a song, which fans surely found themselves singing for weeks after. The memorable lyrics go, "New York City has no power, and the milk is getting sour. But to me, it is not scary, 'cause I stay away from dairy. La la, la la la, la la ..."

And don’t forget to check out Friendsical’s very own blackout moment!

Two of Them Kissed Last Night

Phoebe’s method of delivering unexpected news in song form became well known in Friends, and “Two of Them Kissed Last Night” is a great example. She sings about Ross’ love triangle and his inability to decide between Julie and Rachel, almost shouting at the end, “He must decide, he must decide, even though I made him up, he must decide”. Poor Julie, well never mind… She gets a cameo in Friendsical!

“Sticky Shoes” is a classic that makes a couple of appearances in the show, memorably when Phoebe has a cold and performs in a melodic baritone that she ends up trying to keep. Season 3’s duet version with Leslie is also a favourite, with Phoebe joining in the chorus as asign of forgiveness towards her old singing partner. How can we forget the two of them singing, "Sticky shoes, sticky shoes, always make me smile. Sticky shoes, sticky shoes, next time I'll avoid the pile” before hugging it out at the end.

In the uncut version of the Friends pilot episode, we find Phoebe in the Bleeker Street Subway station singing “Your Love”, which is a humorous take on the complexities of an unhappy relationship. “Love is sweet as summer showers. Love is a wondrous work of art,” she intones, before adding the immortal lines, “But your love, oh your love, your love is like a giant pigeon, crapping on my heart. La la la la la …”

Last, but certainly not least isthe iconic “Smelly Cat”, which is a firm fan favourite – so much so that it has inspired several memes. Debuted in Season 2’s “The One With the Baby on theBus”, it then makes several more appearances in subsequent episodes, with thelyrics, “You may not be a bed of roses, and you're no friend to those with noses” proving particularly inspired.

If our list of Phoebe’s best songshas got you feeling nostalgic and you’re looking for things to do around Coventry, don’t miss the chance to see Friendsical. You can book your tickets online today.