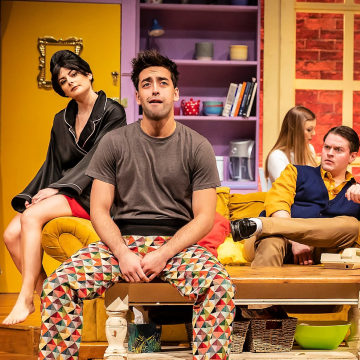 Our 7 Funniest Friends Episodes of all Time

If you want a laugh, there’s 85-hours of the hit TV series Friends to watch, with Chandler’s one-liners, Phoebe’s randomness and Joey’s catch phrases sure to put a smile on your face. But which episodes of the popular Friends show are the funniest? There’s a long list of potential options, but here, we’ve narrowed it down to our seven favourites… One for each friend and Gunther!

Ross has a black-tie event to attend with all his friends. But no-one is ready and time is ticking. When Joey sits in Chandler’s chair and refuses to move, the row between the pair escalates. Chandler hides his friend’s underwear, so Joey wears ALL of Chandler’s clothes - much to the frustration of poor Ross. This episode is actually the inspiration for Act Two of Friendsical!

As the gang wraps up their holiday in Montauk, Monica gets stung by a jellyfish leaving Joey to put her out of her misery in a rather unconventional way - by peeing on her. Of course, when they tell the others, it doesn’t go down well. After much hesitation, Monica dramatically recounts the events stating, “I got stung, stung bad. I couldn’t stand, I couldn’t walk.” Joey then explains how he saw the cure on the Discovery Channel.

Temporarily without health insurance due to his recent unemployment, Joey strains to avoid a trip to the doctor, despite a hernia rendering him a ball of agony on the floor. Elsewhere, Rachel and Monica discover Ross has adopted a British accent while lecturing at the university. “What the hell are you doing?” Monica asks. To which Ross replies, “I was nervous… I opened my mouth and this British accent just came out.”

In this episode, three-time divorcee Ross is struggling with yet another divorce which adversely impacts his mental health. He’s given the not-so-affectionate nickname "mental Geller '' by his colleagues and placed on a sabbatical after he freaks out at his boss for accidentally eating a Thanksgiving-leftovers sandwich he had left in the fridge. “MY SANDWICHHHHHH.”

One by one, everyone bar Ross (who is still in something of a fragile emotional state following the sandwich incident) finds out that Monica and Chandler have been secretly dating. But they’re all keen to have a bit more fun with it before the truth is out in the open. The result is a hilarious scene in which Phoebe tries to seduce Chandler. This also created the famous line, “They don't know that we know they know we know”, which is a name of a song in Friendsical when they all share secrets!

In The One with the Cop, Ross buys a new sofa, but he can’t get it up the stairs. As he, Rachel and Chandler attempt to manoeuvre it up the narrow staircase, Ross barks the now infamous instruction: “pivot, pivot, PIVOT!” With the sofa cut in half, Ross then takes it back to the store stating: “I’d like to return this couch, I’m not satisfied with it.” Check out what Ross pivots in Friendsical… it’s not as you might expect!

Ross is dating Charlie. But things get a bit uncomfortable when he walks in on Joey and Rachel kissing. He’s definitely not fine but he doesn’t know how to deal with it. So he arranges a double date. Surely if he cooks fajitas and says ‘I’m fine’ repeatedly in high-pitched tones, no-one will ever know that he’s sad.

If you’re looking for fun things to do in Coventry, don’t miss Friendsical now on tour. Based on the hit TV show Friends, this parody is one of the best Coventry attractions of the summer.