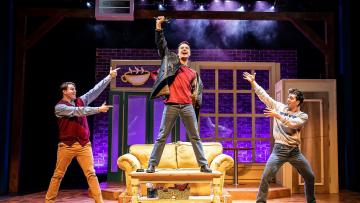 Friends has been popular for decades now, with fans enjoying ten seasons and a whopping 236 episodes of the comedy series. There’s even a Friends the musical parody touring UK theatres. But did you know that mistakes were made while filming? From small details to significant plot holes, here are six mistakes you probably didn’t even notice.

In Series 6, Phoebe is introduced to Monica’s sous chef Tim. ‘Sous’ means ‘under’ in French but this goes over Phoebe’s head when she asks if he’s Monica’s boss. By Season 10, however, Phoebe attempts to teach Joey French and appears to have a firm grasp of the language. Unless she’d been quietly studying on the side, this is a plot hole. Although, Phoebe did just randomly break out in Italian one time after meeting Joey’s Nonna.

The Magna Doodle on Joey and Chandler’s apartment door features a lot throughout each series and often contains funny messages to brighten up the backdrop. But this has led to some continuity errors. In the fourth season episode, “The One with the Wedding Dresses,” the Magna Doodle message keeps changing. When Rachel enters the apartment it says, “get out. ”But when Chandler explains why he doesn’t dance at weddings, it says, “Poop.” A few seconds later when Ross comes back in, it reads “get out” again. Check out the Friendsical Magna Doodle Board and see what that reads!

Unless you’ve watched Friends on repeat over and over, you’ve probably not paid much attention to the doors. But they open and lock differently depending on what’s going on. In the first season’s Thanks giving episode Monica and Rachel leave in a hurry and get locked out. This makes it seem like the doors lock automatically. But how is this possible when Chandler is seen bursting into the apartment moments earlier?

When filming, it’s normal for actors to stand in for certain cast members from time-to-time. But did you know that stand-ins for Rachel and Monica can be seen on-screen by mistake? In the episode The One with the Mugging, Rachel races into the apartment and she and Joey talk in the doorway. When Joey turns to talk to everyone else, someone else can be seen in Rachel’s place. And she’s not even wearing the same clothes. Similarly, in The One with Rachel’s Date, Monica and Phoebe chat on the couch at Central Perk. When the camera changes angles to provide a close-up of Phoebe’s face – someone else is sitting in Monica’s seat.

In the Season 6 episode, The One Where Chandler Doesn’t Cry, Chandler admits that he hasn’t been able to cry since he was a child. But this isn’t exactly true. In Season 4, Chandler tears up when both him and Joey are asked to be the best man at Ross’ wedding to Emily.

In the Season 7 episode, The One Where Chandler Doesn’t Like Dogs, Ross mentions that he doesn’t like ice cream. Apparently it’s too cold and hurts his teeth. But Ross is regularly seen eating ice cream throughout the show. He shares an ice cream cone with his monkey Marcel and when Ross gets together with Elizabeth in Season 6, he’s seen eating ice cream with her. Come on Ross, make your mind up. Do you like it, or not?! Well, there’s plenty of reference to ice-cream in Friendsical, when Ross decides to “Grab A Spoon!”

Wondering what to do in Coventry? Then don’t miss the Friendsical parody now on tour. It’s one of the best things to do around Coventry if you love the hit TV show.