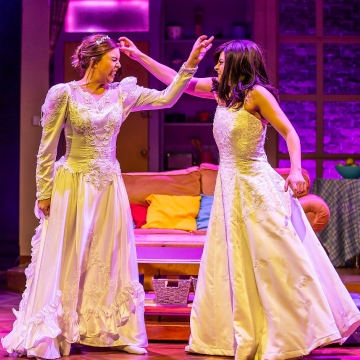 Friends is one of the most popular comedy shows of all time, with audiences across the world falling in love with Rachel, Ross, Phoebe, Chandler, Monica and Joey. It’s a brilliantly scripted, well-cast show with a sentimental plot and loads of laughs thrown in on top. But even if you’ve seen the show a thousand times and are a super fan, there may still be fun facts you don’t know. Here are seven interesting details that might have slipped through the net.

Before settling on Friends, many name suggestions were made. This included Six of One, Friends Like Us and Insomnia Cafe. In the end, the creators settled with the simplest option and it’s hard to imagine it being called anything else now.

Remember Phoebe’s twin - Ursula? Well, Friends wasn’t her only role. Lisa Kudrow was also playing a waitress called Ursula on another sitcom called Mad About You at the same time as filming friends. Seeing as both shows were set in New York, the writers decided it would be fun to make Ursula a character on Friends, appearing as Phoebe’s somewhat evil and even more dysfunctional twin.

Believe it or not, Phoebe and Chandler were never meant to have starring roles in the series Friends. In fact, the show was going to revolve around four friends, with the other two popping up now and again. The cast loved Matthew Perry and Lisa Kudrow’s interpretation of the characters so much, however, that they landed much bigger roles. See how the cast of Friendsical bring these much-loved characters to life… As well as many of your favourite guest characters.

Phoebe agrees to carry the babies of her brother and his partner, but ends up with triplets. This storyline became necessary when Lisa Kudrow fell pregnant in real life. The bump is real, but she only gave birth to one baby and not three. Phoebe’s pregnancy features within Friendsical and with a special Phoebe song to go with it.

Matt LeBlanc recently admitted that he was completely broke before landing the role of ladies’ man Joey Tribbiani in Friends. He got down to his last $11 and used his first paycheck to buy a hot meal - that’s cutting it pretty fine there Matt.

Gunther was meant to just be a background extra. But when he was given a line in the second series, the crew realised just how funny he was and made his part in the series even more significant. Rumour has it that he had to dye his hair every day to keep it so blonde. Sadly, the actor who played Gunther, James Michael Tyler, passed away in 2021 but he certainly left a legacy. Exclusive to Friendsical performances in Coventry and Edinburgh, watch out for a special dedication to Gunther… The seventh friend.

Joey and Chandler’s huge white dog statue actually belonged to Jennifer Aniston in real life. She was gifted it by loved ones when she landed the job in Friends - but clearly she thought it looked better on the Friends set!

If you love this series, don’t miss the Friends play currently on tour. It’s one of the best comedy plays of the moment, based on the popular cast of this hit show.